How Stopline processes your report

The rapid pace of change in the world of IT and communications technology and the proliferation of new digital services on the internet pose an ongoing challenge when it comes to identifying illegal content. Stopline employees are prohibited from actively searching for illegal material on their own initiative. As a result, Stopline’s success is primarily down to a large number of vigilant internet users and its strong networks and partnerships at home and abroad.

Every tip we receive from internet users counts

For each report, Stopline checks whether the reported material meets the definition of child sexual abuse material or National Socialist content.

After receiving a report, Stopline employees analyse the content to establish whether it is actually illegal according to Austrian law. If it is, Stopline notifies the relevant executive agency immediately: Investigating child sexual abuse material falls under the remit of the Federal Criminal Police Office (BK), while the Federal Office for Protection of the Constitution and Counterterrorism (BVT) is responsible for investigating National Socialist material. In addition, any affected providers in Austria are notified or the corresponding overseas partner hotlines operated by members of INHOPE, the umbrella organisation against illegal content on the internet, which are also responsible for initiating any further measures.

When it comes to processing illegal content, the country of origin of the provider plays a decisive role. If the content is hosted by an Austrian internet service provider, Stopline contacts the host provider asking them to remove the content from the internet so that it can no longer be accessed online. Stopline does not delete or censor any allegedly illegal material itself. Instead, it gives providers recommendations on how to proceed if any is discovered.

If Stopline receives reports of other potentially illegal material that does not fall under its specific remit, the organisation’s employees will still try to provide assistance by sharing additional sources of information and details of the right organisation or body to contact. 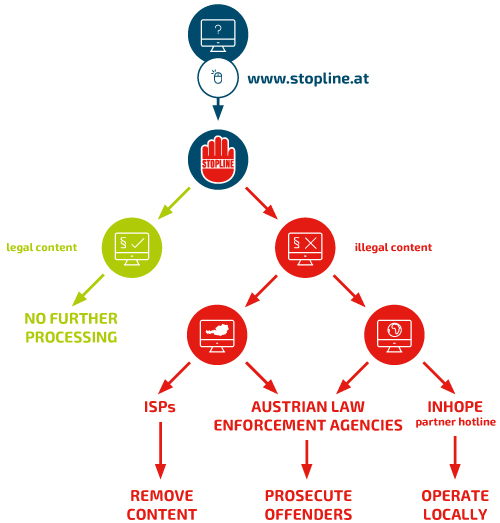 Data protection and anonymity
Stopline respects the right to privacy of the person making the report, which is why it is possible to do so anonymously. No data relating to the person making the report is attached to the record. Any data that is voluntarily submitted by the sender is kept strictly confidential and not shared with any third parties.